One of the most interesting scenes of the episode sees Halston (Ewan McGregor) and Elsa Peretti (Rebecca Dayan) going to Bergdorf Goodman to check how the newly-launched fragrance is doing. The sales assistant explains that it’s sold out.

There’s a huge bottle on the counter, but the prop masters have done something weird here: they put the glass stopper of the original Halston perfume on a bottle of Halston Couture, a fragrance launched in 1988 (two years before the designer’s death). The original bottle was all made of glass, while the other had accents of silver, stopper included.

This scene is not all about Halston, though: if we look behind Elsa and Halston, we can see a couple of factice flacons bouchon coeur by Guerlain. It’s impossible to know what fragrance they contain. Maybe Mitsouko?

When Halston and Elsa leave the room, we can see on a glass table a factice bottle of Guerlain Chamade, created by Jean-Paul Guerlain and launched in 1969.

Next to Chamade there’s a flacon montre of Shalimar eau de cologne, a trademark prop in many Ryan Murphy shows. The gold stopper is historically accurate because it was used between 1972 and 1979. 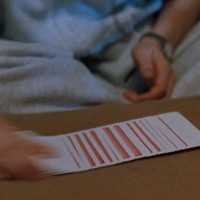