In this episode there are two references to Mäurer & Wirtz 4711, the original Echt Kölnisch Wasser. The scene above is set in Cologne central station: while Martin Rauch is taking a train to East Berlin, we can see huge neon letters spelling the name of the eau de cologne.

In another scene, the iconic Molanus bottle can be seen in the desk drawer of Frau Netz (Michaela Caspar), General Edel’s secretary. When she opens the drawer, we can see the perfume bottle and a copy of the magazine Der Spiegel (June 6th, 1983 issue). The cover title – Deadly Disease AIDS, the Mysterious Illness – is connected to the plot:  a member of the pacifist movement, Felix von Schwerin, is actually ill with AIDS; he may have infected Tobias Tischbier and, as a consequence, Alex Edel. 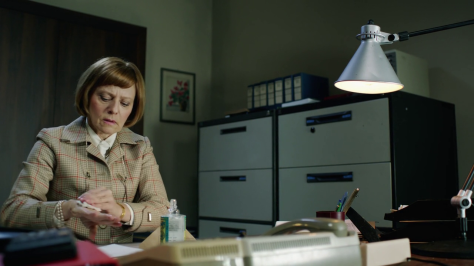 Ursula Edel, the General’s wife, pays a visit to his office and gives Frau Netz a certificate of medical leave of absence for her son Alex. This is ironic: in that moment, Alex is not ill (he has temporarily left the army, trying to fight his father’s influence with a grand gesture which will end up tragically), but he may be, even if he doesn’t know it yet. Besides the fact that Frau Netz doesn’t shake Ursula’s hand, she reacts to the woman’s departure from the office by cleaning her hands with a handkerchief soaked in 4711 cologne. Known for its revitalising and relaxing effects, this cologne is commonly used as hand sanitizer, too.